Treasures of India takes you through the Heart & Soul of North India. The tours takes you to see rich history and numerous ancient monuments of North India. Starting the tour from the Capital – Delhi a multicultural city with historical monuments & crowded bazars . Our next stop is Agra to see the breathtaking Taj Mahal – famous love memorial in the world built in white-marble& the Agra Fort.Embellished with royal heirlooms of past Maharajas, fast-paced Jaipur – The Pink City holds majestic palaces, imposing forts & Havelis.Your tour continues to the fondly known as the “City of Lakes”, Udaipur, the erstwhile capital of the Kingdom of Mewar, is resplendent with vast hilltop forts, palaces, temples and gardens that serve as reminders of its majestic history.

The capital of India, Delhi has been continuously inhabited since the 6th century BC and has served as a capital of various kingdoms and empires throughout its history.Delhi is a city with a historic old Delhi and the modern New Delhi. From historical monuments to crowded shopping malls, from an extensive network of the modern metro system to TukTuk Rides, Dilli has multiple personalities and is considered to be the city with a heart.

Afternoon a Short visit to the Agrasen Ki Baoli Stepwells
Agrasen ki Baoli, is an ancient water reservoir which rises from the depths of the earth to stand atop 103 stone steps. Hidden amidst the business towers and residential apartments of central Delhi, this place is a quiet and serene experience perfect for photography lovers. The old brick walls of the structure take you back in history, and as you go down the steps, a drop in temperature can be experienced.The structure of Agrasen Ki Baoli occupies a width of 15 metres and is 60 metres long which is quite impressive considering the fact that it is believed to have been built somewhere around the time of Mahabharata.

Morning do Sunrise Yoga Session for 1 Hour in Lodhi Gardens
This yoga and meditation experience at Lodi Gardens offers travelers the perfect way to unwind, reflect and just breathe. Then sit among the quiet grounds and lush greenery of Lodi Garden, where you'll meditate under the guidance of an expert teacher and develop an inner state of calm to carry with you through the chaotic city.

Later Proceed on a Private Guided full day city tour of New and Old Delhi visiting Qutab Minar - which is the tallest brick minaret in the world, Humayun's Tomb - This tomb, built in 1570, is of particular cultural significance as it was the first garden-tomb on the Indian subcontinent, India Gate – a war memorial which was built to salute the brave Indian soldiers of the British Army who lost their lives in World War 1, Rastrapati Bhawan or the President’s House and the Parliament Street where you can see various government buildings, Raj Ghat the cremation place of the Father of the Nation Mahatma Gandhi, the Red Fort, a perfect example of Mughal architecture built by Emperor Shah Jahan between 1639 and 1648, Jama Masjid one of the largest mosques in India. It was built by the Mughal Emperor Shah Jahan between 1650 and 1656 at a cost of one million rupees, and was inaugurated by Imam Syed Abdul Ghafoor Shah Bukhari from Bukhara, present-day Uzbekistan and cycle rickshaw ride into the narrow streets of Chandni Chowk, one of the oldest market of Asia full of spices, dried fruit, silver jewellery and vivid saris, while the narrow side streets are crowded with tiny shops selling essential oils, stationery and traditional Indian sweets

Afternoon proceed on a Private Guided city tour of visiting Agra Fort - built near the gardens of the Taj Mahal stands the important 16th-century Mughal monument. Agra Fort was also the headquarters for the Mughal Emperor Shah Jahan, Itmad-Ud-Daulah a beautiful tomb built of red sandstone in the memory of architect of the Taj Mahal

Later depart by Private Vehicle for Jaipur. The famous walled capital city of Rajasthan. Jaipur has been fondly known as the “Pink City” since it was painted pink in 1876 as a sign of the people's hospitality towards the visiting Queen Victoria of England and the Prince of Wales.

Enroute visit to the Fatehpur Sikri which is a world heritage site and was built by Akbar. It boasts of several palaces, Masjid’s and large halls which denote typical Mughal architecture Upon arrival in Jaipur check in at your pre booked Hotel

Return to Hotel and Have Breakfast in the Hotel

Later proceed for a Private guided city tour of Jaipur visiting Amber Fort in the Aravali Hills, which is a super example of Rajput (medieval Hindu) style Architecture. Visit the Sheesh Mahal or the Hall of Victory glittering with mirrors in the Fort. We take the Jeep or the Elephant to reach the entrance to the Amber Fort. Your Guide will then continue the tour of Jaipur with the visit to the Jal Mahal a palace in the middle of the Man Sagar Lake in Jaipur city. Then our guide takes us to the City Palace and Observatory. The City Palace in the heart of the old city is a blend of Rajasthan and Mughal architecture, the complex has a variety of courtyards, gardens and buildings. The Palace of Winds – Also known as Hawa Mahal, a five-storied structure of pink sandstone has semi-octagonal and delicately honeycombed windows overlooking the main Street of the old city. It was originally built to enable the ladies of the Royal household to watch everyday life.

Later proceed for a Heritage Walking Tour to Explore the Old City of Jaipur
There is no better way to understand a destination than to meet the locals,. Walk through the lanes of the old city and to see traditional craft surviving the harsh winds of the modernity. On this walk we will take you in to narrow lane to introduce you to the culture of this splendid city, explain you about the other side of culture beyond the concrete structures and allow you to absorb each of its splendors. This beautiful walled city of Jaipur has lot more to offer the tourists other than its famous monuments. The city was founded in 1727 AD, was planned according to the grid system based on the Hindu “Shilpi Shasta”. The city was divided into Nine Chowkaris or blocks, intersecting by the main streets and lanes, surrounded by a crenellated wall and pierced by seven gates. Living in this beautiful walled city gave us an opportunity to showcase other beautiful and interesting parts of this city and reveal its hidden secrets.

Later depart by Private Vehicle for Udaipur, a beautiful city in Rajasthan famous for its lakes and palaces which was considered as a symbol of Royalty for the past centuries. The city is built on three interconnected lakes the Fateh Sagar Lake, the Pichola Lake and the Swaroop Sagar Lake.

Enroute also visit to Ranakpur visiting Jain Temples. Upon arrival in Udaipur check in at your pre booked Hotel

Overnight stay at the Hotel in Udaipur

This morning with your guide for visit the towering City Palace the largest in Rajasthan, and the Saheliynki Bari (Garden of the Maidens) which was laid for a group of forty-eight young women attendants who accompanied a princess to Udaipur as part of her dowry. From here we visit the superb Jagdish Temple noted for its elephant - carvings. This temple is dedicated to Lord Jagannath and is at a great height which can be approached by a long flight of stairs. We later continue our tour and visit to Nagada & Eklingi.

Evening experience wonderful Dharohar dance show at Bagore Ki Haveli.
This hour long show takes place in the courtyard called as the Neem Chowk. The beautifully lit up balconies of the Neem chowk add charm to the Haveli setting up a stage for the traditional Rajasthani folk dance and music.TheDharohar Dance Show is very well organized starting with a brief introduction given by a Rajasthani woman dressed in a traditional Rajasthani attire. The performances are preceded by the beating of a drum, blowing of a conch shell and a religious song.The show consists of well choreographed dances ably supported by the musicians playing tabla and harmonium. The women performing the dance wear typical Rajasthani folk costumes with colorful ghagra cholis embodied with glass work and embroidery work.

Overnight stay at the Hotel in Udaipur

Our guest relation executive will transfer you to Udaipur Airport to board Flight for Delhi. Upon arrival in Delhi Airport you are met by our executive and transferred to your pre booked Hotel

Depending on the Flight timing you will get a chance to visit the popular Dilli Haat. The DILLI HAAT provides the ambience of a traditional Rural Haat or village market, but one suited for more contemporary needs. Here one sees a synthesis of crafts, food and cultural activity.

This Food and Craft Bazar is a treasure house of Indian culture, handicrafts and ethnic cuisine, A unique bazaar, in the heart of the city, it displays the richness of Indian culture on a permanent basis. 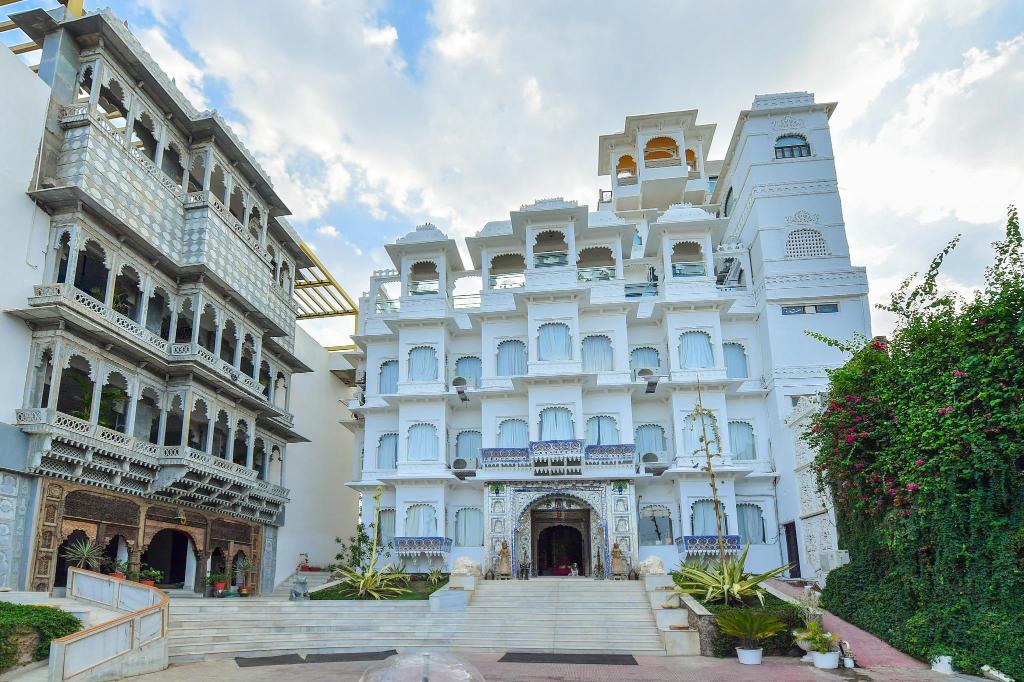 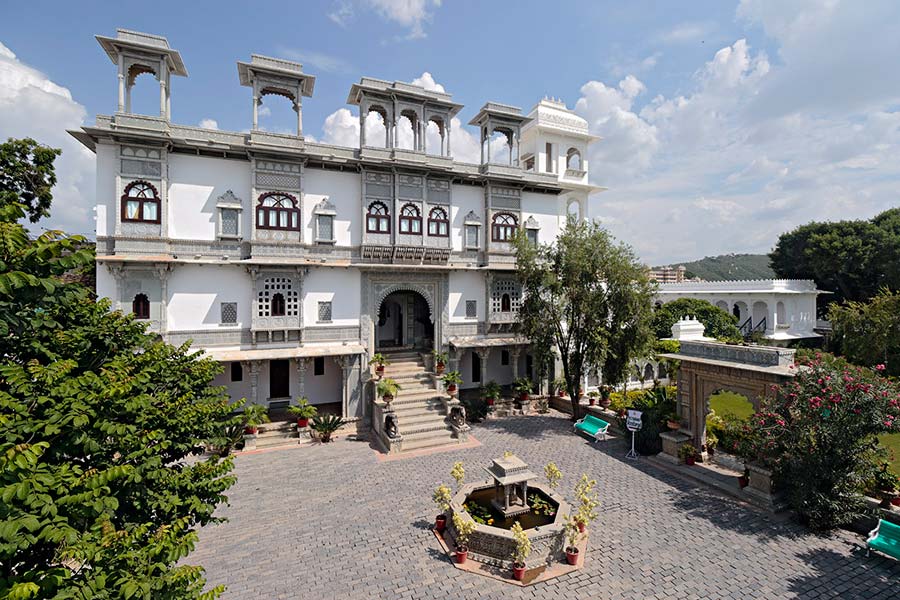